The Jomon Period (13,000 BC to 300 BC) fostered human development, which were gatherers, fishers, and hunters inhabiting the Japanese islands. This period is named after the pottery during this era, which had a cord-pattern (Jomon) design.

In the Yayoi Period (300 BC to 300 AD), rice cultivation and the use of iron and bronze was introduced to Japan. With the introduction of agriculture and modern ideas, social classes began to evolve. A Chinese historical document noted in the third century that a powerful chieftain called Himiko ruled Yamatai in Japan.

During the Kofun Period (300 - 538), the emergence of a highly aristocratic society with militaristic rulers developed. Large mounded tombs (kofun) were built for the political elite, hence this period’s name.

An imperial family established Japan’s first unified state in the fourth century, known as the Yamato clan. Yamato Japan extended from Kyushu to the Kinai plain, in which an emperor ruled.

However, the Soga clan soon took over the political power resulting in a system where most emperors remained only as a symbol of the state. The Asuka Period (538 - 710) marked the initiation of Buddhism in Japan. Up until that era, Japan’s religion was based on the Shinto religion, which is still practiced today. However, fundamental changes during this period were not only religious beliefs, but other important foreign concepts and practices that had a profound impact on Japanese society.

Prince Shotoku wrote the Constitution of Seventeen Principles which consisted of moral and political principles. It is also said that he played an important role in promoting Chinese beliefs.

The Taika Reform was also established, which involved a government and administration system based after the Chinese model.

The Nara Period (710 - 794) highlights the establishment of the first permanent capital at Nara. The Japanese capital was moved from Fujiwara-kyo to Heijokyo (modern Nara) in 710.

It was during this era that the Great Buddha Daibutsu was built at the Todaiji temple in Nara. Buddhist art and architecture flourished, and Buddhism became a prevalent religion.

Literary works such as Kojiki and Nihon Shoki (histories of Japan) were compiled. An imperial anthology of poetry called Man’yoshu was also celebrated. 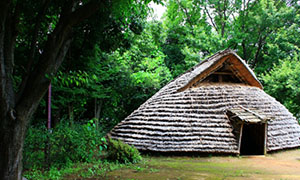 In the Heian Period (794 - 1185), there was a great flowering of classical Japanese culture. The period is named after the capital that moved to Heian-kyo (now Kyoto), heian meaning “peace and tranquility”.

The Fujiwara family gained control of the political scene for several centuries, ruling on behalf of the emperors. After the clan’s power reached its peak in 1016, the fall embarked when the ability of the Fujiwara leaders began to decline and public order could not be maintained. This lead to land owners hiring samurai for protection, further resulting in a much more influential military class.

In the 12th century, two military families called the Minamoto (or Genji) and Taira (or Heike) gained much power. The rival clans fought a deciding war for supremacy, the Gempei War, lasting from 1180 to 1185. The Minamoto defeated the Taira control, and Minamoto Yoritomo succeeded as the leader of Japan. He was appointed shogun and established a new government in Kamakura.

The Kamakura Period (1192 - 1333) began with shogun Minamoto Yoritomo establishing a new feudal government called Kamakura Bakufu. It was simpler and more efficient than the one in Kyoto under Japanese conditions.

After Yoritomo’s death in 1199, a feud for power began between the Bakufu of Kamakura and the Imperial court in Kyoto. When the Kamakura defeated the Imperial army during the Jokyu disturbance (1221), the Hojo regents achieved complete control over Japan.

The Hojo clan maintained tight control and brought several decades of peace and economic expansion until an outside power threatened Japan. There were Mongolian invasion attempts in 1274 and 1281 which the Honjo family successfully defeated.

However, when warriors were not properly rewarded for their efforts, they turned their loyalty away from the Kamakura government. In turn, imperial power was restored and the Kamakura Bakufu was overthrown by 1333.

The beginning of the Muromachi Period (1333 - 1573) was dominated by a political standoff between Emperor Go-Daigo, who briefly restored imperial power and overthrew the Kamakura Bakufu, and former supporter Ashikaga Takauji. Ashikaga Takauji who had once fought for the emperor, challenged and succeeded in capturing Kyoto.

Takauji appointed himself as shogun in 1338. The government buildings in Kyoto (from 1378) were located in the Muromachi district, giving the period its name.

Shogun Ashikaga Yoshimitsu (1368 - 1408) established good trade relations with Ming China which lead to an improved economic change. As a result, there was a development of markets, several towns, and new social classes. 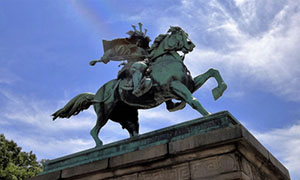 The Ashikaga shoguns and the government in Kyoto declined during the 15th and 16th centuries. New feudal lords, referred as daimyo, continuously fought each other to exert control over different parts of Japan. This occurred for several decades known as the Sengoku period, a complicated age of civil wars.

By the 16th century, powerful warlords rivaled against one another to gain control over the entire country. One of them was Oda Nobunaga, who commenced the unification of Japan by capturing Kyoto in 1568 and overthrew the Muromachi bakufu in 1573.

During the Azuchi-Momoyama Period (1573 - 1603), Oda Nobunaga continued eliminating his enemies after establishing himself in Kyoto. In 1575, Nobunaga defeated the Takeda clan in the battle of Nagashino.

Hideyoshi conquered the Northern provinces, Shikoku in 1583, and Kyushu in 1587. In 1590, Japan was finally reunited after defeating the Hojo family in Odawara. Hideyoshi’s massive castle, the Osaka castle, was built the same year.

A command was issued by Hideyoshi to expel Christian missionaries. Franciscans entered the country anyways (1593) and Jesuits remained active. Hideyoshi intensified the persecution of Christian monasteries and executed 26 Franciscans as a warning.

After uniting Japan, Hideyoshi made an unsuccessful attempt at conquering China. Hideyoshi stubbornly did not give up and failed yet again until 1598, the same year he died.

A man named Tokugawa Ieyasu, a former partner of Hideyoshi and Nobunaga, succeeded Hideyoshi as the most powerful ruler of Japan. The Edo Period (1603 - 1867) began when Tokugawa Ieyasu was appointed shogun by the emperor and founded his government in Edo (now Tokyo). The Tokugawa shoguns ruled and maintained a secluded peace for over 250 years.

In 1615, Ieyasu eliminated the Toyotomi clan and captured the Osaka castle. Peace prevailed throughout the Edo period as he and his successors no longer had any rivals.

Poetry, music, Kabuki and bunraku (puppet theater), geisha, popular stories, a rich literature, and art were all among the culture that flourished during this era.

By the end of the 18th century, external pressure became a profoundly important issue in Japan. Unsuccessfully, Russians first tried to develop trade contacts with Japan, followed by Europeans and Americans in the 19th century. Eventually, Commodore Perry forced the Tokugawa government to open international trade ports in 1854. 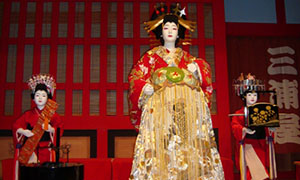 The Tokugawa government fell in 1867-68 due to heavy political pressure, and Emperor Meiji’s power was restored. The Meiji Period (1868 - 1912) was introduced when political authority shifted from the shogunate to the imperial court. When Emperor Meiji moved from Kyoto to Tokyo, it became the new capital.

Japan among other subjugated Asian nations, were forced to sign treaties with the Western powers. Since these treaties admitted the West into one-sided economical advantages, Meiji Japan was determined to regain its independence from Europeans and Americans.

The new government made drastic reforms aiming to state equality among the people of Japan. Specifically, boundaries between social classes of Tokugawa Japan were gradually broken and religious freedom was established.

In 1889, Japan received its first European-style constitution. A parliament known as the Diet was established while the emperor held sovereignty over the army, navy, and executive and legislative power.

In 1894, the Sino-Japanese War was a reaction due to a conflict of interest in Korea between China and Japan. Japan defeated China and received Taiwan. Although Russia, France, and Germany forced Japan to return other territories.

The Russo-Japanese War in 1904-05 transpired because of a new conflict of interest in Korea and Manchuria, this time between Russia and Japan. The Japanese army was victorious, and furthermore, gained territory and international respect.

Japan’s influence on Korea increased leading to its annexation in 1910. The war successes caused nationalism in Japan to grow, as well as confidence in other Asian countries.

The era of the ruling clique of genro came to an end when Emperor Meiji died in 1912.

During the Taisho period (1912 - 1926), political power was shifted from the genro to parliament and democratic parties.

Japan joined the Allied powers during the First World War, playing a minor role in fighting German colonial forces in East Asia. At the Paris Peace Conference in 1919, Japan’s proposal of the “racial equality clause” was rejected by the United States, Britain, and Australia. 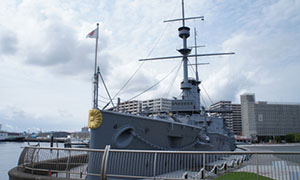 The Exclusion Act passed by the US Congress in 1924 was yet another factor that lead to the deteriorating relations preceding World War 2. Japan’s economic situation worsened after WW1 when the Great Kanto Earthquake of 1923 and the depression of 1929 hit.

In the Early Showa Period (1926 - 1945) the military held almost complete authority over the government.

Japan’s influence over Manchuria had been gradually increasing since the Russo-Japanese war in 1904-05. When Chinese nationalists challenged Japan’s position in Manchuria (in 1931), the Kwantung Army (Japan’s armed forces) occupied Manchuria.

The second Sino-Japanese War broke out in 1937. The Japanese forces almost succeeded in occupying the whole coast of China. Although, the Chinese government never surrendered fully, and the war continued until 1945.

Upon agreement with the French Vichy, Japan occupied French Indochina (Vietnam) and joined the Axis powers with Germany and Italy in 1940. The US and Great Britain reacted with an oil boycott, which further resulted in more conflict and Japan’s decision to go to war.

In December of 1941, Japan attacked the Allied Powers at Pearl Harbor and other Pacific points, and was able to expand control over a large territory.

The Allied forces slowly won back the territories occupied by Japan after the battle of Midway in 1942. Intensive air raids started over Japan in 1944. In 1945, Okinawa was invaded by US forces.

The Allied Powers requested Japan in the Potsdam Declaration (July 27, 1945) to surrender, or destruction would continue. Even after the US forces dropped two atomic bombs in Hiroshima and Nagasaki (August 6 and 9), the military would not consider the terms.

However, on August 14th, Emperor Showa decided to surrender unconditionally.

The Postwar Showa period (1945 - 1989) marked the decades of Japan’s tremendous recovery and its rise to a global economic powerhouse second only to the United States, its former enemy and subsequent ally.

“The Japanese Miracle” is the remarkable period of Japan following the decades after 1950, where the country rebuilt itself politically and economically.

The Heisei period (1989 - present) is Japan’s current era. This era went immediately into effect after the death of Hirohito, the Showa Emperor, and his son Akihito succeeded the throne.

The Heisei period was marked by a turbulent of politics (over 15 prime ministers within first two dozen years), a prolonged economic slowdown, and financial crises.

In 1995, there was a deadly earthquake in Kobe. Another catastrophic earthquake and tsunami hit northeastern Honshu in 2011, which further lead to the Fukushima nuclear accident. 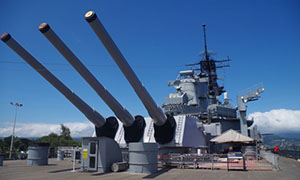