The Awa Odori is regarded as the largest dance festival in Japan celebrated each year during the Obon festival in Tokushima from August 12th to the 15th. This festive event filled with music and dance has been celebrated for over 400 years attracting over 1 million visitors to visit Tokushima Prefecture every year. The popular belief of the Awa Odori festival comes from a drunken celebration after the establishment of Tokushima Castle in 1586. During the Edo period, there was even a strict rule stating that the samurai class could not part take in this tradition publicly, due to shameful actions during the celebration. Today men, women, and children dress up in traditional clothing and dance along the music creating the atmosphere to the region’s top tourist attraction. The most popular facility located at Tokushima city enjoyed by foreign visitors from all over the world, is the Awa Odori Kaikan. A wide variety of pictures with costumes and instruments used in the festival offer guests a better understanding of Tokushima Prefecture with its festive culture. Visitors can also enjoy the Awa Odori performances at different times of the day within this location, perfect for travelers who visit Tokushima during non-festive months of the year. 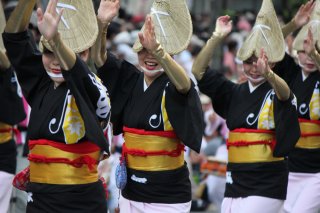