Zenkoji Temple is said to house the first Buddhist statue ever brought to Japan. The temple was first founded in the 7th century and is one of the most popular and important temples in the country. Every six years for a few weeks, a copy of the original statue is shown to the public while it remains hidden. The next time to see the statue will be in 2021. Nagano city developed around Zenkoji Temple, which emphasizes its importance to the history of the town. The main hall was rebuilt in 1707 and is decorated with various Buddhist statues. A fee is required to enter the inner hall and in the basement is an underground passage. In the completely dark passage people must find the hand rail, which represents the “key to paradise.” It is believed to grant salvation to anybody who touches it. Inside the recently built pagoda is the Zenkoji History Museum, which showcases intricately carved statues of various Buddha and Bodhisattva as well as 100 Rakan (disciples of Buddha). South of the main hall are the impressive Sanmon and Niomon Gates. 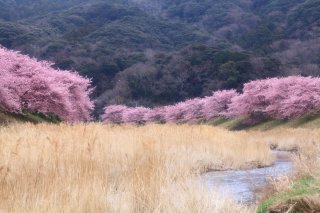 Take an exclusive 5-day trip Beyond Tokyo to experience the blooming of Japan's earliest cherry blossoms at the Kawazu Cherry Blossom Festival and a trip to see the adorable Snow Monkeys!