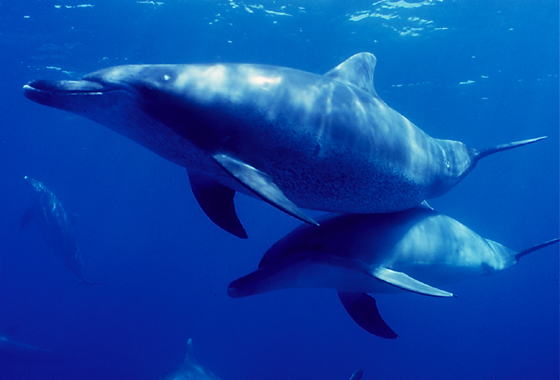 The Bonin Islands (also known as the Ogasawara Islands) is famous among diving fans. If you are spending lots of time in Japan, it is a recommended destination. The Ogasawara Islands is lying in the ocean about 1,000 kilometers south of Tokyo and is composed of about 30 islands of various sizes. As most of them are uninhabited except Chichijima and Hahajima Islands, pristine nature is kept there. Diving can be enjoyed throughout the year, but the good season is from April through September when the water is warmer. By having an outing to the area around Mukojima Island (also known as Kater Island, the main island of the Mukojima Islands famous for the dive sites), you may be able to see a school of dogtooth tuna at the well-known "Maguro-ana" (tuna hole) during this season. In addition to diving, swimming with dolphins and whale watching are also popular activities. From May through September is the best season for swimming with dolphins, summer and autumn are for sperm whale watching and during the months of January through April, you may be able to see a group of humpback whale as they come to Ogasawara for breeding.