Futarasan Shrine (二荒山神社, Futarasan Jinja) was established in 782 by Shodo Shonin and is located next to the extravagant Toshogu Shrine. The shrine is dedicated to the three deities of the sacred mountains in Nikko. This refers to Mount Nantai, Mount Nyoho and Mount Taro, which are known as the most sacred mountains in the area. When entering the Futarasan Shrine area there is a place to the left of the haiden (offering hall) which can only be accessed by paying a nominal fee. Inside the paid area is a small garden, spring, old sacred trees and a couple of more halls. The Sacred Bridge that is built over the Daiya River belongs to Futarasan Shrine. The main shrine was built by Tokugawa Hidetada in 1619. From 1871 to 1946, the shrine was officially designated as a Kokuhei Chusha. There is a sword housed at the shrine with the name of Tomomitsu of Osafune, a famous 14th century swordsmith, inscribed on it. 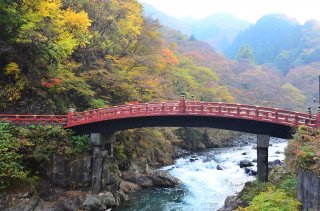