Autumn leaves in Japan are almost as popular as the cherry blossom season. Kōyō is the Japanese word for autumn leaves. Kōyō and momiji (maple leaves) use the same kanji and has been that way since the Heian Period. It is a time when all the mountains, rivers, countryside, temples, shrines, parks, gardens and areas around famous structures are surrounded with fall foliage. Searching for autumn leaves has been a custom of Japan since the 8th century when it was mentioned in the compilation of Manyoshu poetry. The activity was even mentioned in the famed “The Tale of Genji,” as a scene of hunting for gorgeous autumn colors. Even a large part of the Kokin Wakashu poetry collection is centered on the autumn leaves. There are many maple trees, Japanese Rowan, Japanese larch, Ginkgo, beech, birch, and many others that change colors during this time. The autumn foliage starts appearing as early as September.

When and Where to see Autumn Leaves in Japan 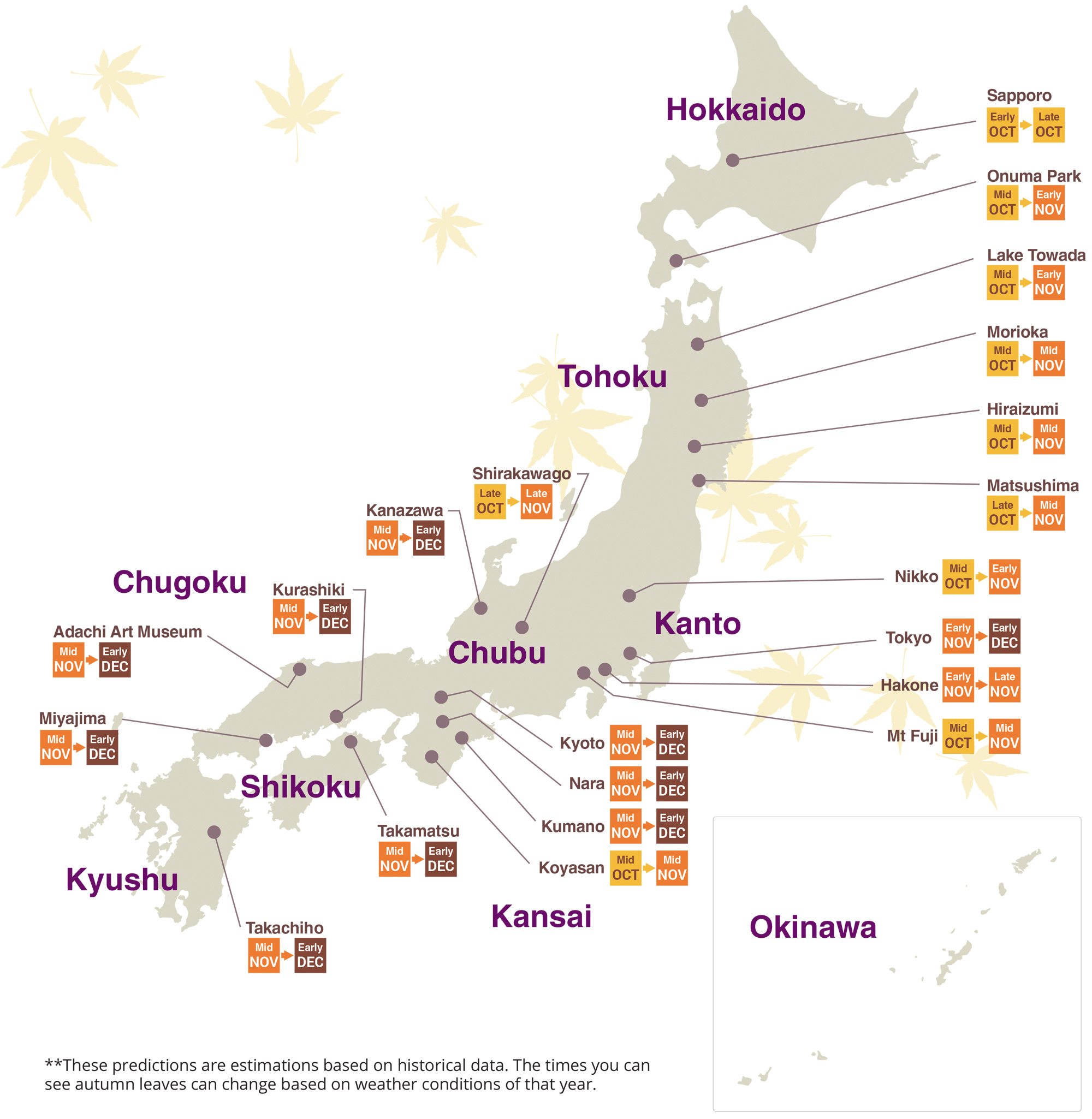 It first starts in the Hokkaido region and works its way down Japan. Daisetsuzan National Park shows the first signs of autumn. In the Onuma Quasi National Park, which is located north of Hakodate, are two lakes that are covered with autumn leaves beginning from mid-October. Onuma and Konuma Lake can be found at the foot of Mount Komagatake. One of the attractive features of the area is the walking trails throughout the grounds during the fall season. Along the trails you can see the leaves painted in autumn colors. You can also rent bicycles and take the cycling course that goes around Lake Onuma. Seeing the two lakes surrounded by bright colored maple trees is a sight worth the trip.

Tohoku is the next area that will show signs of autumn leaves. Some of the most popular places to see them would be around Lake Towada. The autumn color of the trees starts appearing in late October. It is part of the Hachimantai National Park, which reaches Aomori, Akita, and Iwate Prefectures. You can enjoy cruises that leave from the Nenokuchi and Yasumiya ports. There is a viewpoint between the two peninsulas of the lake. While on the boat you can see the surrounding areas covered with fall foliage. On the eastern shores of Lake Towada is the only outlet for the body of water to disperse from. It utilizes the Oirase Mountain Stream that runs through a virgin forest for 14 kilometers. The trail that goes along the stream is one of the most popular places to see autumn leaves in Japan. There are numerous maple, beech and white cedar trees located within the 14 kilometers. This trail allows visitors to stroll under the bright colored leaves and be treated to excellent views of the scenery encompassing the stream. Further down the Tohoku region is the city called Morioka. The Morioka Castle Site Park has many trees that change to fall colors around early November. Stone walls are all that remains of the former structure and is remarkably amazing during the autumn season.

In the Kanto region there is a famous historical city called Nikko where the autumn leaves appear much earlier when compared to other spots in the area. Nikko is designated a UNESCO World Heritage Site for its Toshogu Shrine, Futarasan Shrine, and Rinnoji Temple. The color starts changing around early October and continues to mid-November. During the early season you can see them at Ryuzu Waterfall, Yumoto Onsen, and Yudaki waterfall. In the mid-season the topped ranked tourist spots will be in season like Lake Chuzenji, Kegon Waterfall, and Irohazaka Winding Road. There are many visitors who enjoy the fall scenery at Nikko and come from all over to see them. Further down Japan there is a place called Hakone, which is known for its fantastic views of Mt. Fuji in the background. Riding the unique cruising boats around the lake during the autumn season is an activity worth doing while in the area. Being less than 100 kilometers away it is a city known for its hot springs and natural beauty. The added charm of the fall foliage is another reason to explore Hakone. The best time to see the trees in autumn season is in mid-November. In Gifu Prefecture is Shirakawago, which is a village known for their Gassho (prayer hands) style farmhouses. Those farmhouses have been designated a UNESCO World Heritage Site and provide magnificent sceneries throughout the year. In the fall these heritage sites will be surrounded by bright colored foliage. From the Shiroyama viewpoint you can see both the farmhouses and village. The times to see the village would be from October to November.

In the city of Kyoto there are many sites that attract the attention of visitors during the peak of the autumn season, which is from mid-November to early December. Kyoto was once the political and cultural center of Japan. There are many traditional structures that have survived the test of time. Surrounding these sites are numerous mountains and hill that change with the season. In Arashiyama, which is famous for its bamboo grove, is the Togetsukyo Bridge that is encompassed by hills that add to the scenery. When the peak for fall hits the area becomes more attractive than usual. Kiyomizudera, a famous Buddhist Temple, has large scaffolding that overlooks the trees below. Like the cherry blossoms planted down below there are other trees that change colors during the autumn season. While you admire the beauty of Kinkakuji, a building where the upper two floors are covered in gold leaf, with fall colors in the background.