WHAT TEMPLES OR SHRINES SHOULD I SEE IN JAPAN? DON'T MISS THESE 24 BEAUTIFUL TEMPLES AND SHINTO SHRINES!

According to a 2006 survey, 209 million Japanese people claimed to have a religious affiliation. However, the total population of Japan is only around 128 million. You might think Japan must be the most religious country in the world, but this is far from the truth. Further research found that only around 35% of Japanese people are official members of organized religions.

Shinto and Buddhism are the main religions in Japan. For most, though, religious beliefs don’t affect their daily lives except during significant life events, festivals, and holidays. As the old joke goes, a Japanese person is born a Shintoist, marries as a Christian, and dies Buddhist. The data for the 2006 survey came out strange because many of the respondents happened to tick several boxes.

Knowing this, you may feel confused seeing so many people praying at temples and shrines during your travels in Japan. It might help to think of Japanese people as spiritualists instead of following a specific dogma. Despite individual beliefs, communities take care of neighborhood shrines, and school groups visit religious sites throughout Japan. After all, these places are saturated in history and filled with traditional art.

In total, there are around 80,000 shrines and 77,000 temples in Japan. How will you choose which ones you’ll visit? Keep reading to learn quick facts about major Buddhist temples and Shinto shrines to find the perfect places for you!

10 OF THE MOST BEAUTIFUL SHRINES IN JAPAN


Shinto is the indigenous Japanese religion, and it’s as ancient as the culture itself. Unlike most monotheistic religions, Shinto doesn’t have any scriptures, preaching, or even concrete rights and wrongs. People pray to kami, which often translates to “Japanese gods,” but it’s a little more complicated than that. To sum it up, kami is a sacred essence that every person, animal, concept, or object possesses.

1) Toshogu Shrine (Nikko, Tochigi Prefecture)
The final resting place of Tokugawa Ieyasu who unified Japan under the shogunate system. It’s famous for its wood carvings like the “see no evil, speak no evil, and hear no evil,” monkeys. 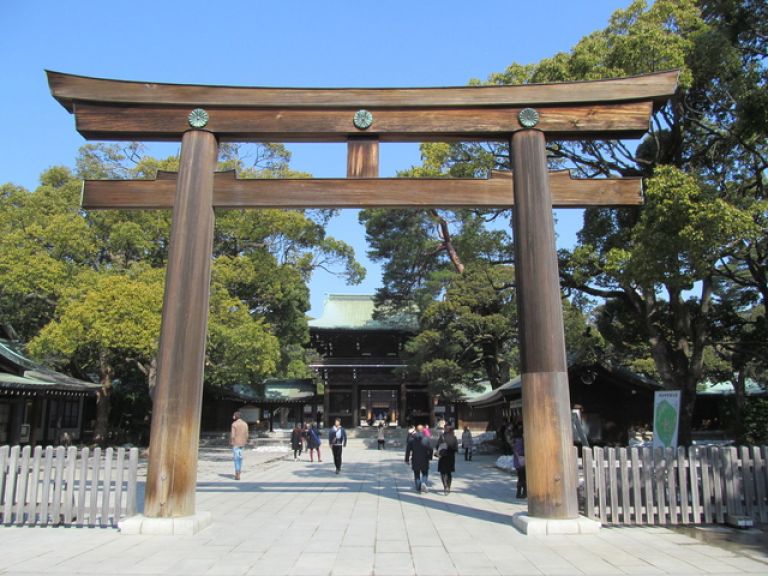 2) Meiji-Jingu Shrine (Tokyo)
Surrounded by 100,000 trees, Meiji Shrine honors Emperor Meiji and Empress Shoken who opened Japan to the Western world. Located next to Harajuku, it’s one of the most beloved shrines to visit in Japan. 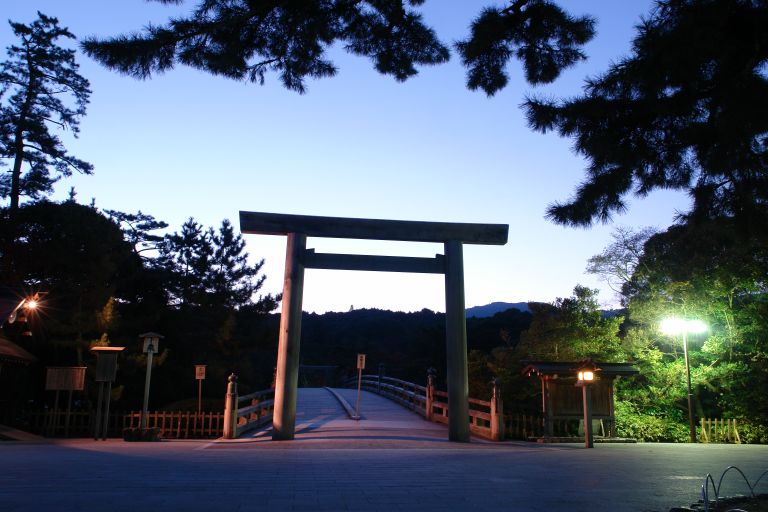 3) Ise Grand Shrine (Ise, Mie Prefecture)
As the enshrinement of the sun goddess Amaterasu, this is one of the most significant Shinto shrines in Japan. It dates back around 2,000 years, which predates the introduction of Buddhism. 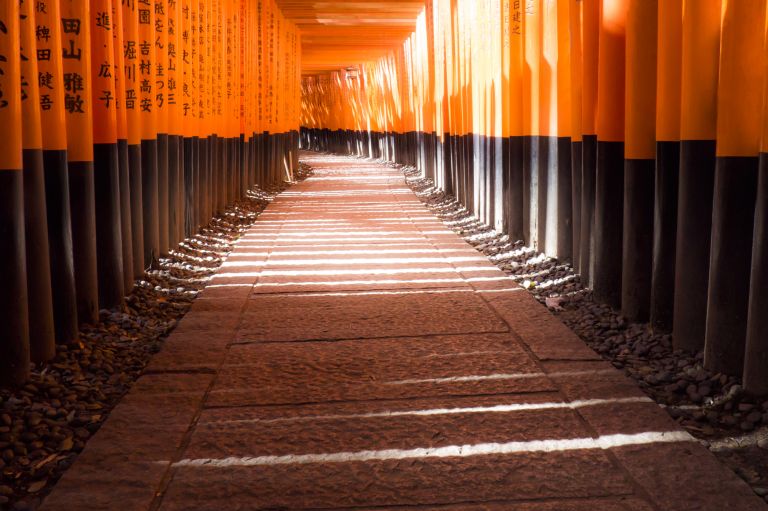 4) Fushimi Inari Shrine (Kyoto)
In the Shinto religion, Inari gods protect rice cultivation, which in the modern era can translate to any business industry. The Fushimi Inari Shrine houses thousands of vermillion torii gates that companies around the country have bought and donated. 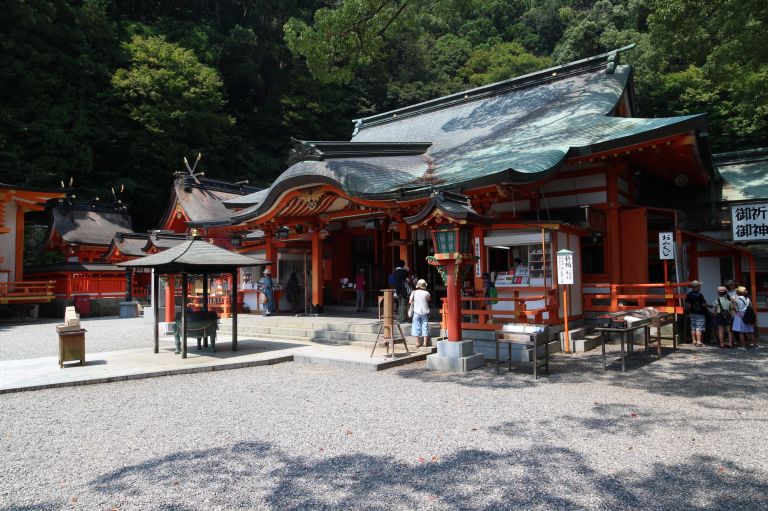 5) Kumano Nachi Taisha Shrine (Kumano, Wakayama Prefecture)
Visitors to the shrine can get a spectacular view of Nachi Falls—Japan’s tallest waterfall. Ingrained with spiritual energy, the premises are only a few kilometers away from the Katsūra hot springs. 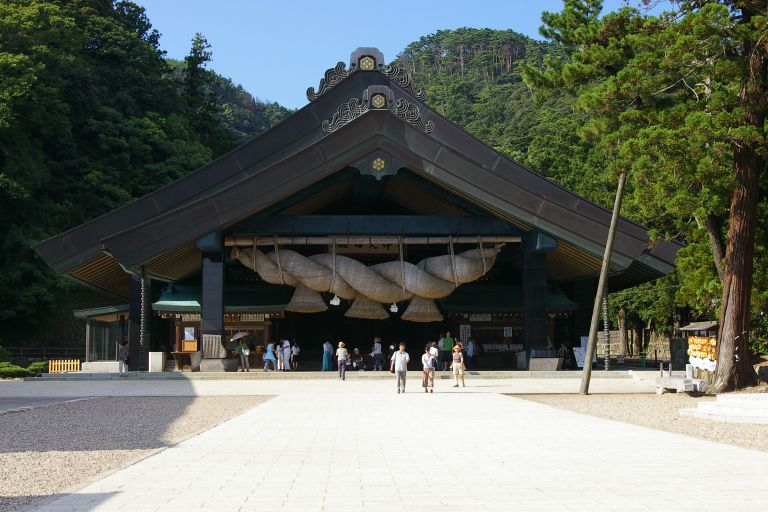 6) Izumo Taisha (Izumo, Shimane Prefecture)
There aren’t any records of Izumo Taisha’s establishment, but it’s thought to be the oldest shrine in Japan. According to Japanese beliefs, all of the kami (Japanese gods) hold a meeting every year in November during the Kamiari Festival. 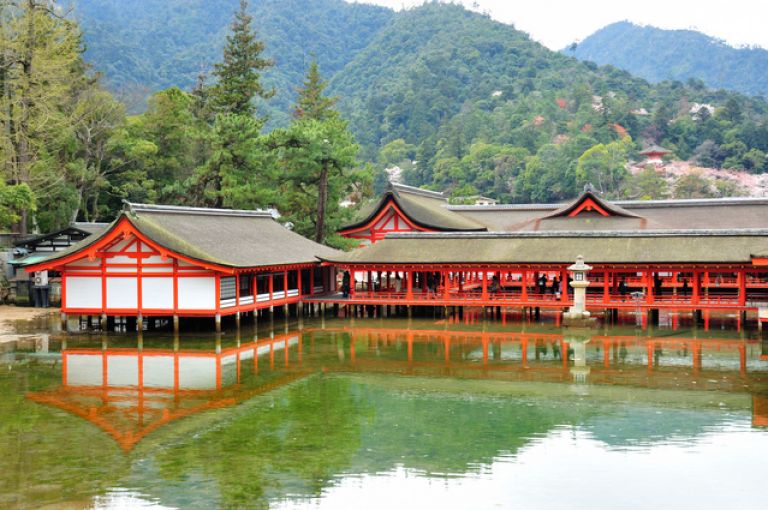 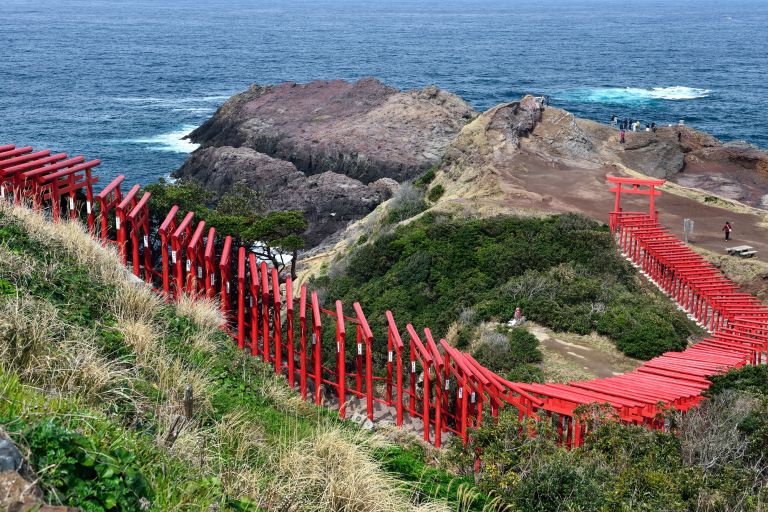 8) Motonosumi Inari Shrine (Nagato, Yamaguchi Prefecture)
Like Fushimi Inari Shrine, Motonosumi is home to fox statues and a collection stunning torii gates. The trail leads you on a hike to a cliff that overlooks the Sea of Japan. 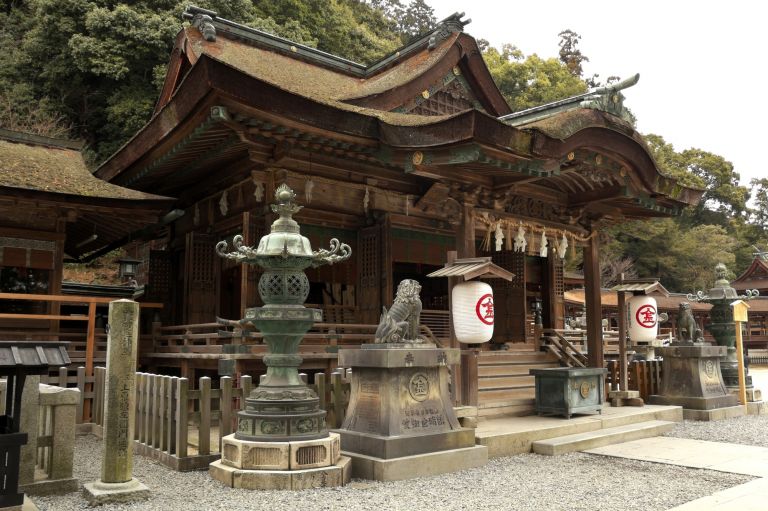 9) Kompirasan Shrine (Kotohira, Kagawa Prefecture)
Going to this sacred site takes perseverance because you must climb 1,368 stone steps to reach it. Despite the challenge, thousands of worshippers visit Kompirasan Shrine every day! 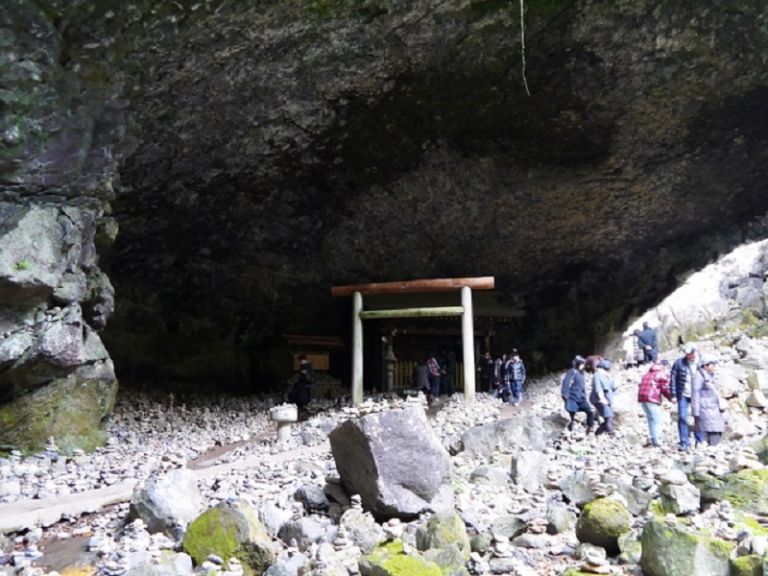 10) Amano Iwato Shrine (Takachiho, Miyazaki Prefecture)
Amano Iwato Shrine is one of the most potent “power spots” in Japan. According to Japanese mythology, the sun goddess hid in the nearby cave taking the light of the world with her. When another deity performed an amusing dance, she finally came out and brought the sun back.


Buddhism came to Japan from China and Korea during the 6th century. The noble class quickly adopted it as the state religion, but it took a while to spread to the common people. These days, Shinto and Buddhism co-exist and complement each other. Many people who follow religious traditions claim to be both Buddhist and Shintoist. 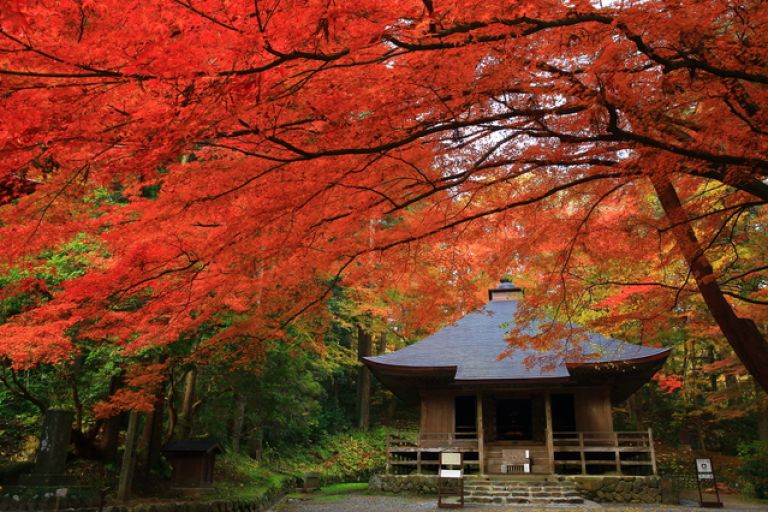 1) Chusonji Temple (Hirazumi, Iwate Prefecture)
Only two buildings remain intact from Chusonji’s founding, but fortunately, one is Konjikido Hall which glitters in gold leaf. In August, visitors can enjoy Noh theater performances on the temple’s grounds. 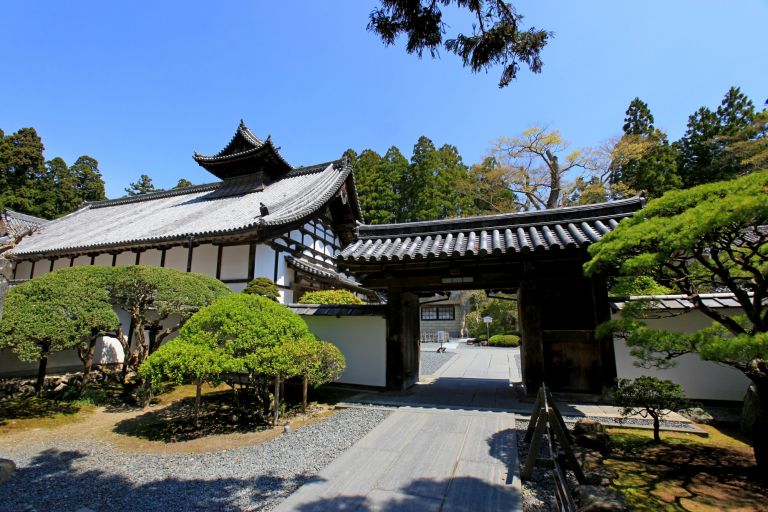 2) Zuiganji Temple (Matsushima, Miyagi Prefecture)
Visitors can approach the Main Hall on a path flanked by cedars or take a detour that passes caves. Some of the temple’s treasures include exquisitely painted and gilded fusama sliding doors. 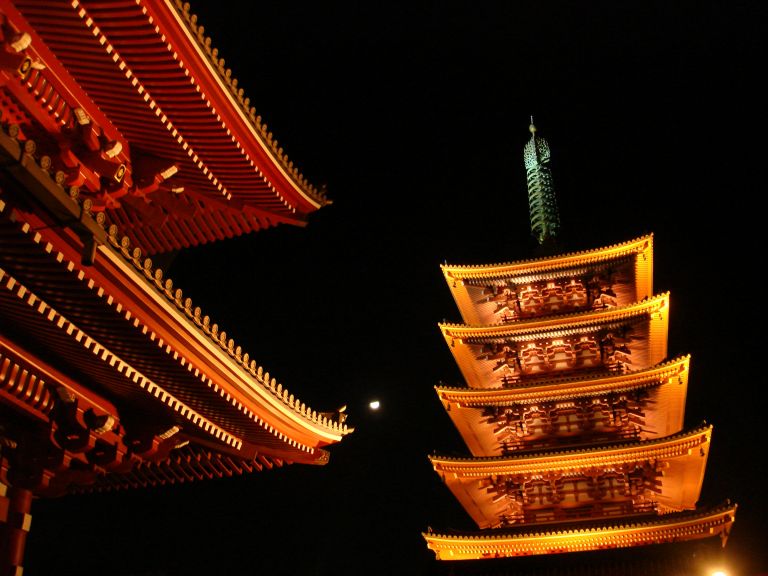 3) Sensoji Temple (Tokyo)
Asakusa’s Sensoji is the oldest and most visited temple in Tokyo. A 200-year-old market selling traditional and unconventional souvenirs lines the street between the Kaminarimon Thunder Gate and the Main Hall. 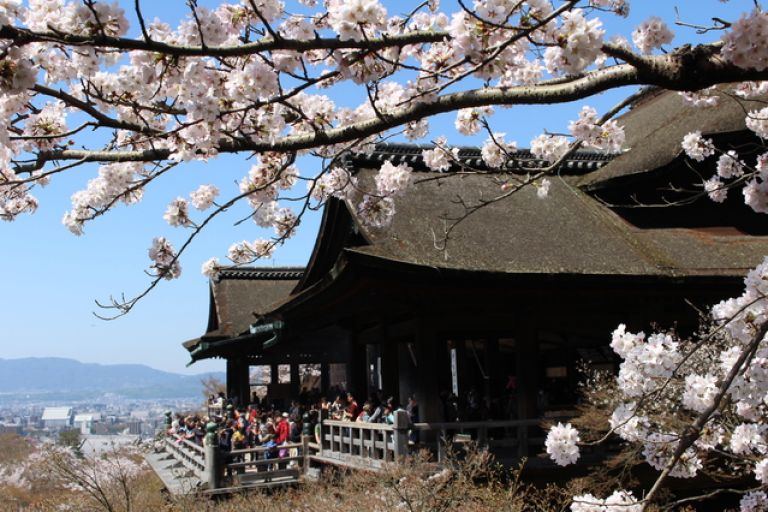 4) Kiyomizu-dera Temple (Kyoto)
Travelers and locals love Kiyomizu-dera for its brilliant cherry blossoms and autumn leaves. You can also drink from the Otowa Waterfall’s springs, which bless you with long life, success in studies, or love. 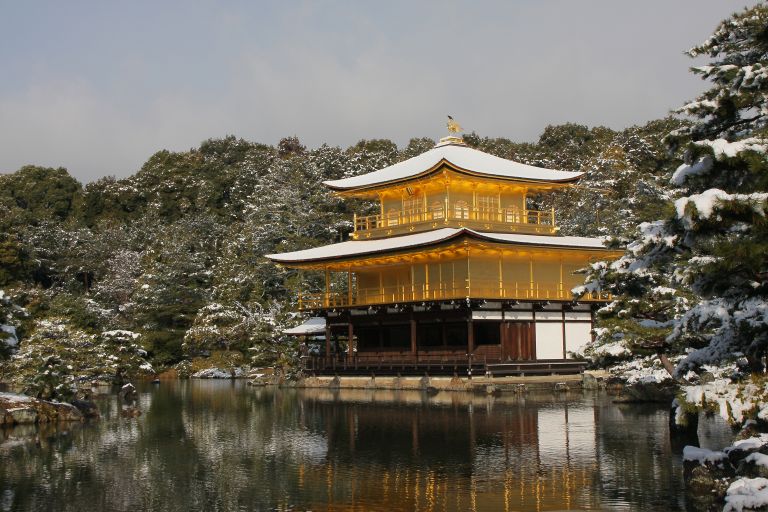 5) Kinkakuji Temple (Kyoto)
Shogun Ashikaga Yoshimitsu built Kinkakuji as a villa but converted it into a temple upon his death. Gold leaf covers the top two floors, which give Kinakuji the nickname, “The Golden Pavilion.”

6) Sanjusangendo Hall (Kyoto)
One of the most influential figures in Japanese Buddhism is the Goddess of Mercy, Kannon. Sanjusangendo is home to 1001 bronze Kannon statues that each have 42 arms and 11 heads. 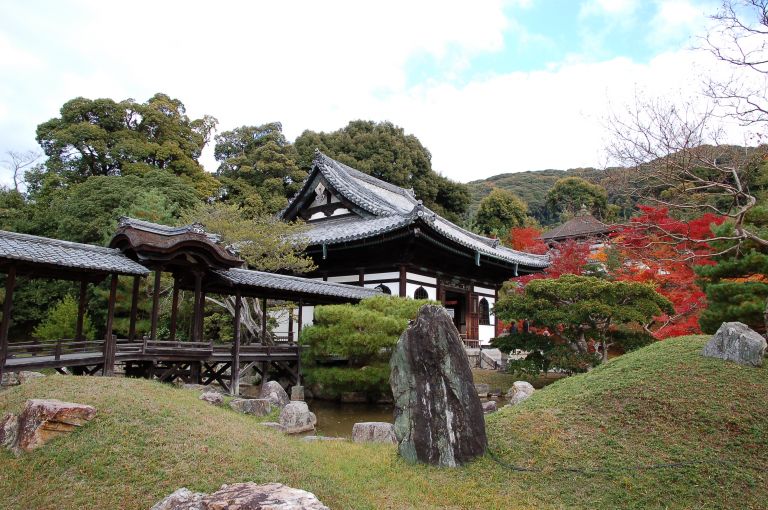 8) Tenryuji Temple (Arashiyama, Kyoto)
Dedicated to Emperor Go-Daigo, visitors to Tenryuji Temple can enjoy the tranquil halls and gardens. The garden behind the temple provides an expansive view of the mountains and leads to a bamboo grove. 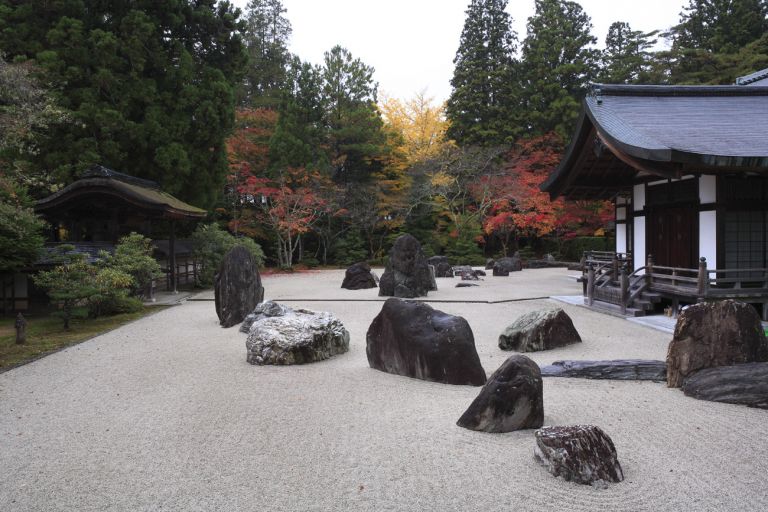 9) Kongobuji Temple (Mt Koya)
Known for having the biggest stone garden in Japan, guests can enjoy green tea in the temple’s tatami-matted rooms. Toyotomi Hideyoshi built Kongobuji to commemorate the death of his mother, and its halls are rife with history.

10) Okunoin Temple (Mt Koya)
Surrounded by nature, Okunoin Temple has the largest cemetery in Japan. There are over 200,000 tombstones, including those of famous Japanese people like Oda Nobunaga, Takeda Shingen, and Date Masamune. 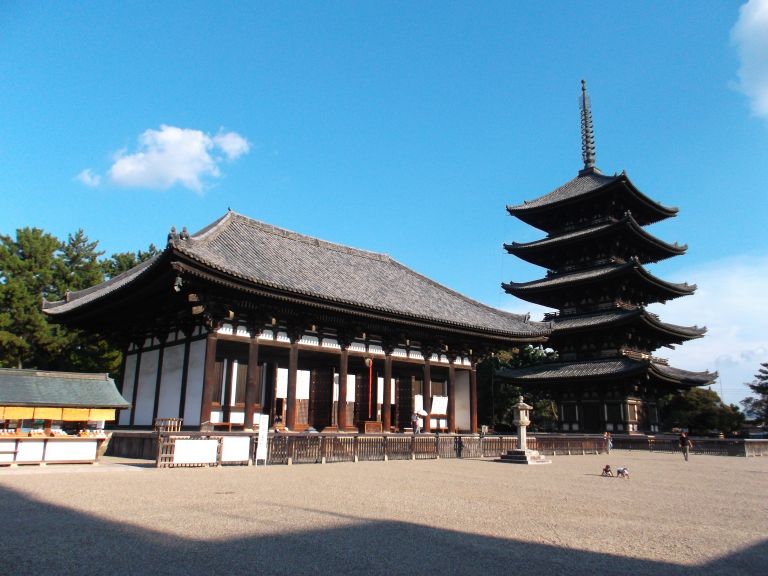 12) Kofukuji Temple (Nara City)
Kofukuji was the Fujiwara clan's family temple. They were politically influential aristocrats in the Nara and Heian eras. The historically valuable buildings include two pagodas, one of which is the second tallest in Japan. 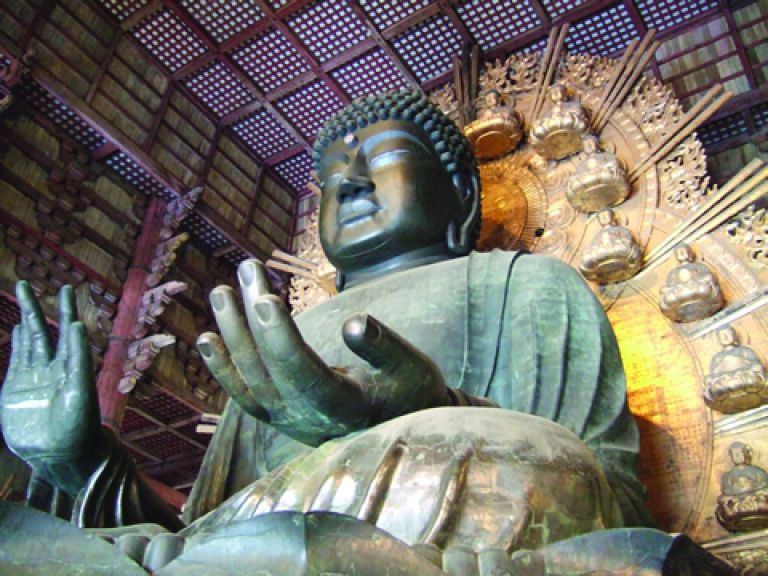 13) Todaiji Temple (Nara City)
After hand-feeding wild deer at the Nara Deer Park, visitors can proceed to the imposing Todaiji Temple. Inside, you’ll see the Daibutsu, which is the biggest bronze Great Buddha statue in Japan. 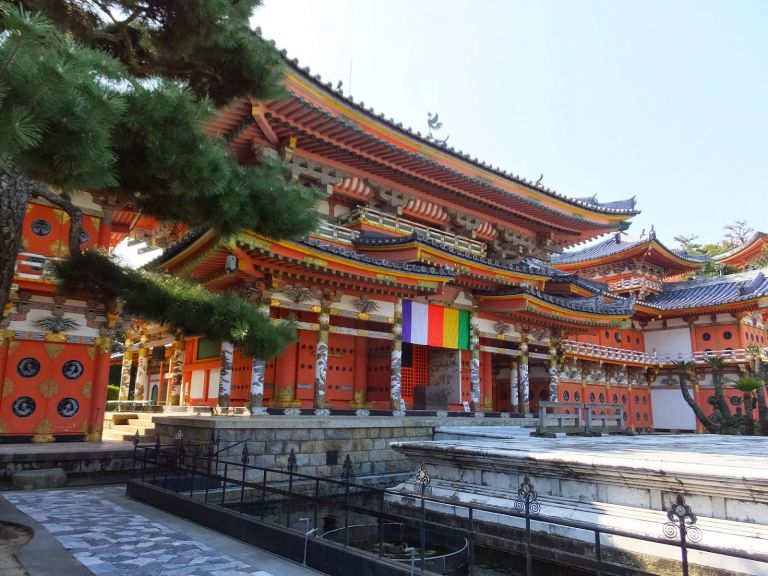 14) Kosanji Temple (Onomichi, Hiroshima Prefecture)
The vibrant colors and magnificent artistry of Kosanji attract visitors from all over the world. Among its attractions include a cave illustrating Buddhist hell and marble structures and statues.

***Note*** All temples and shrines not included on this tour are hyperlinked above.

Always wondered exactly what a Geisha is? Read more for answers and where you can meet a maiko or Ge......

Six traditional Japanese art styles, and how you can experience them.......

12 OF OUR FAVORITE JAPANESE FESTIVALS

Attending a Japanese festival is an experience unlike any other! Here are our favorite annual events......

WHEN TO SEE CHERRY BLOSSOMS BLOOM IN JAPAN | 2023