Where to See Ninjas in Japan 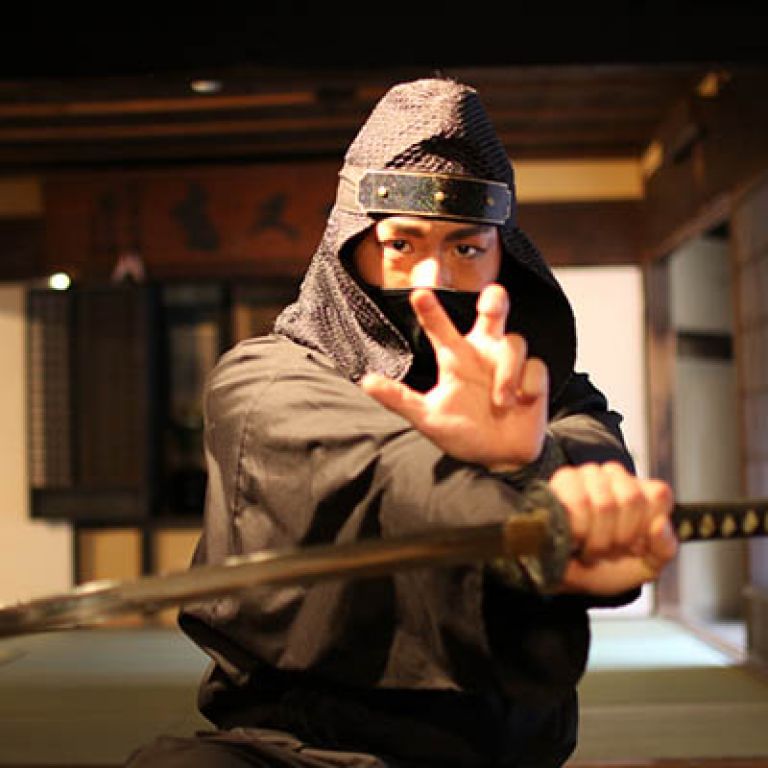 Before you read the rest of this article, I’ve got a simple exercise for you. Turn to the person to your left and ask, “What is a Japanese ninja?” Chances are, they’ll tell you something about a masked assassin who studied the mysterious arts of ninjitsu.

In the movies, ninjas play the protagonists that defeat tyrannical warlords with guerilla warfare and guile, or they’re merciless sell-swords. Maybe they possess supernatural powers like the ability to control elements, summon animals, or walk on water.

Unsurprisingly, the characters we see in anime and manga aren’t historically accurate portrayals of ninjas. However, scholars also debate the trustworthiness of texts written after the Sengoku Period (1467-1600). The conflicting reports might make you start to wonder if ninjas were real.

The short answer is yes, and they still exist today, but their origins might be a little different from your imagination. Let’s go over some of your burning questions about ninjas and where to see them on your next trip to Japan.

WHAT DOES NINJA MEAN IN JAPANESE? 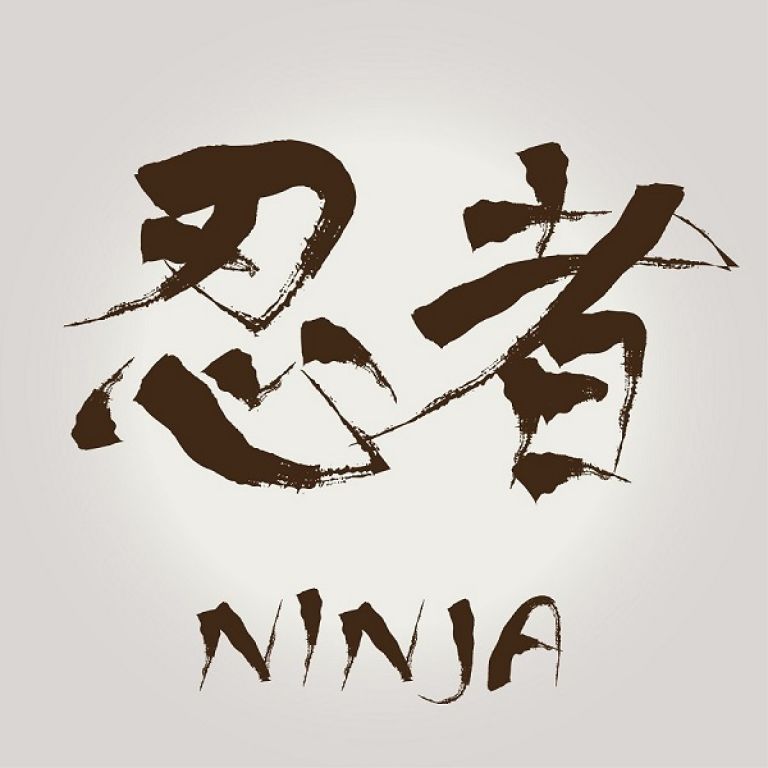 To understand the etymology of “Ninja 忍者,” we’ll need to review some basics about the Japanese language. The writing system uses Chinese-derived ideographs called kanji. Each character has a meaning and phoneme, but they might change depending on the context. Sometimes we’ll use the Early Middle Chinese reading (on’yomi) or the native Japanese (kun’yomi).

Following on’yomi phonemics, 者 is read as sha or ja and translates into English as someone who practices a technique. We see 者 in other words such as 芸者 (geisha) and 作者 (sakusha; writer). The first character, 忍 is a little more complicated. In Chinese, 忍 (ren or nin) means endurance, but when we use the kun’yomi reading, 忍 gets interpreted as “concealment.”

Native Japanese speakers read 忍者 as shinobi-no-mono, and define the word as “a person who learned the art of stealth.” The pronunciation ninja didn’t appear until the 1950s, and it’s thought that Westerns adopted it into English because they found it more accessible. The word appears in written accounts as far back as the 8th-century, but verified records of the formation and deeds of the shinobi are limited. 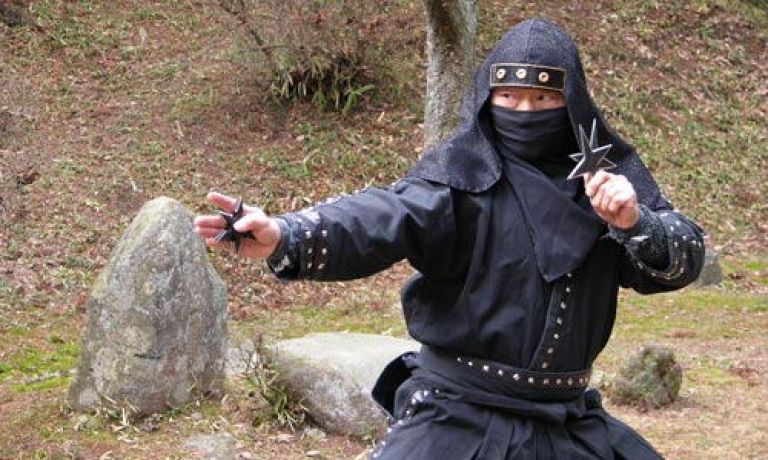 During the Meiji Era, ninja began appearing in literary poems, novels, and folktales. By this time, the shinobi had fallen in obscurity, and writers described these warriors through a nostalgic lens. They began to attribute the magical abilities we see in pop culture today. The most reliable accounts first appear in the 15th-century.

In the Sengoku Period, Japan fell into a time of near-constant conflict and political upheaval. Neither the emperor nor the shogun could control the local lords, and rival provinces battled over resources and political influence. Although the samurai studied Sun Tzu’s The Art of War, reconnaissance missions and psychological warfare didn’t coincide with their observances of ritualistic decorum. As a result, the lords had to hire people outside of the military elite.

It’s likely that many of feudal Japan’s ninjas were burglars, farmers, and other members of the lower castes. In addition to swordsmanship and martial arts, ninjas would fight by using covertness and trickery, so they had to be able to blend in with an enemy army, which high-ranking officers couldn’t do. Since battles took place from Okinawa to Hokkaido, working as a mercenary became a lucrative position. Around the 1400s, families banded together into clans and began to train formally as shinobi. 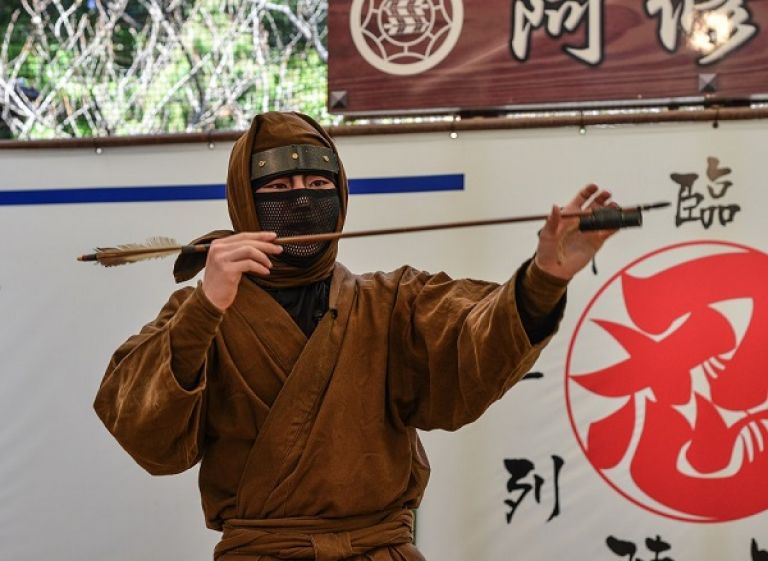 Like with samurai, traditional ninja training began at birth, and children learned skills that were directly handed down from ninja masters. Outside of fighting disciplines, trainees studied survival, scouting, pyrotechnics, and plants to make poison to kill or mix medicine. The collective set of these skills came to be known as ninjitsu in modern times. The most elite shinobi are said to have come from Iga (Mie Prefecture) and the adjacent Koga (also known as Kōka) region.

It’s thought that the Iga and Koga ninja clans were successful due to the isolating mountains surrounding their borders. It was difficult for anyone to invade their territories, and they could keep their tactics secret. Feudal lords actively hired these professionals from 1485 to 1581, until Oda Nobunaga destroyed the Iga ninja clan during the Tenshō Iga War. Survivors swore allegiance to Tokugawa Ieyasu and served as bodyguards.

The last known record of ninja in battle details their role in the Shimabara Rebellion (1637-1638). The shogun hired Koga shinobi to gather intelligence on and terrorize Hara Castle. The Koga obtained secret passwords and snuck onto the grounds to steal food supplies and the castle’s banner. After these events, the shogun’s army quickly defeated the starving and despondent defenders.

With Japan unified under the Tokugawa shogunate, the need for standing militias diminished in the Edo Period. Scholars began to collect information on shinobi fighting techniques and created acclaimed books like Bansenshukai. These texts, written 150 years after the height of Iga and Koga, are some of the only direct knowledge we have about the life of a ninja. 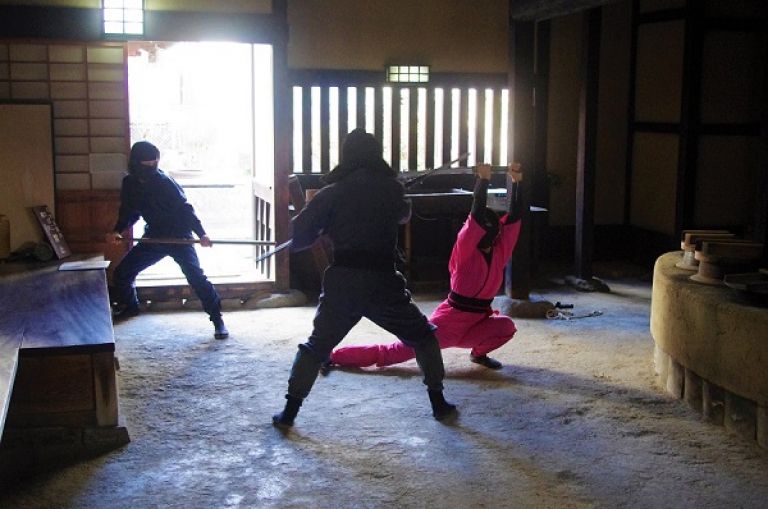 During the Meiji Restoration (1868), the government began rebuilding historical sites, which helped spark sentimentality among the Japanese people. Fiction writers began attributing mystical powers to their ninja characters, and the image of a black-clad shinobi prevailed. In reality, a real ninja looked like a commoner. These weren’t the only romanticized notions that captured imaginations.

Prominent figures of the past retroactively received the shinobi title, but scholars can’t confirm their statuses, or even if they existed. Mochizuki Chiyome, for example, allegedly trained kunoichi (ninja women) under the guise of a school for wayward girls. However, her name didn’t appear in any known records until 1971. Stories such as these, unfortunately, add to the confusion of what we understand about shinobi.

Despite the years and inaccurate depictions, there are still real ninja clans and shinobi today. Most notably, Jinichi Kawakami who heads the Banke Shinobinoden ninjitsu school. Kawakami inherited the Koga clan’s scrolls when he was 18, and is the honorary director of the Iga-ryu Ninja Museum. Although he has taught many pupils over the years, he doesn’t plan on appointing an heir and holds the title of “Japan’s last real ninja.”

WHERE ARE THE NINJAS?


You don’t have to spend years training in a dojo to appreciate the history of shinobi. The following locations are some of the best places to see ninja in Japan. 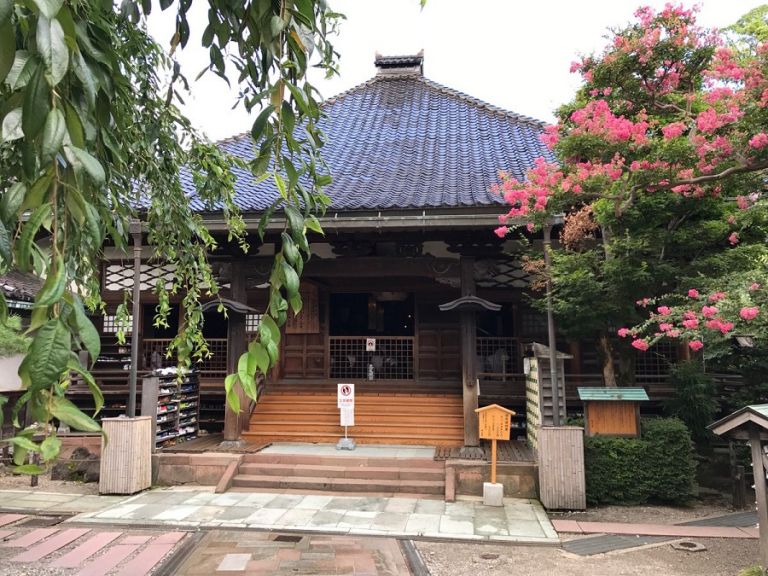 Officially known as Myoryuji Temple, the structure itself has no affiliation with any clans. It earned this nickname due to its architecture that mirrors shinobi houses. As you explore the building, you’ll see hidden tunnels, secret rooms, traps, and mazes of hallways and stairs. 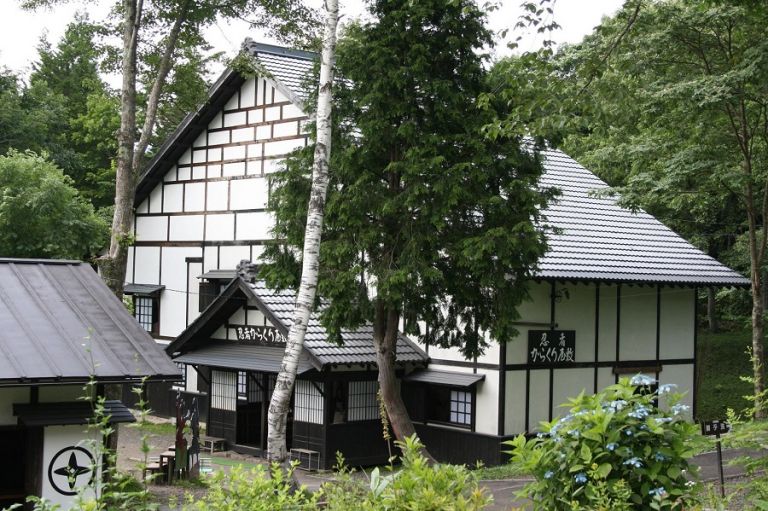 In the 12th-century, a warrior from Nagano fled to Iga after fighting on the losing side of the war between the Minamoto and Taira clans. In Iga, he studied under their masters before returning home and opening the Togakure school. The museum houses several complexes, one of which displays the school’s weapons and tools. 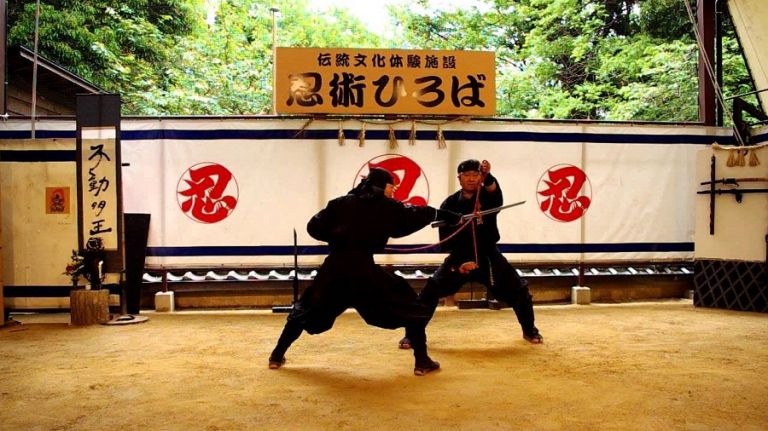 The museum’s collection includes 400 tools and weapons from the height of the Iga Clan’s power. There is also an abundance of scientifically analyzed writings from this time. A tour through the museum includes a choreographed demonstration of their uses. 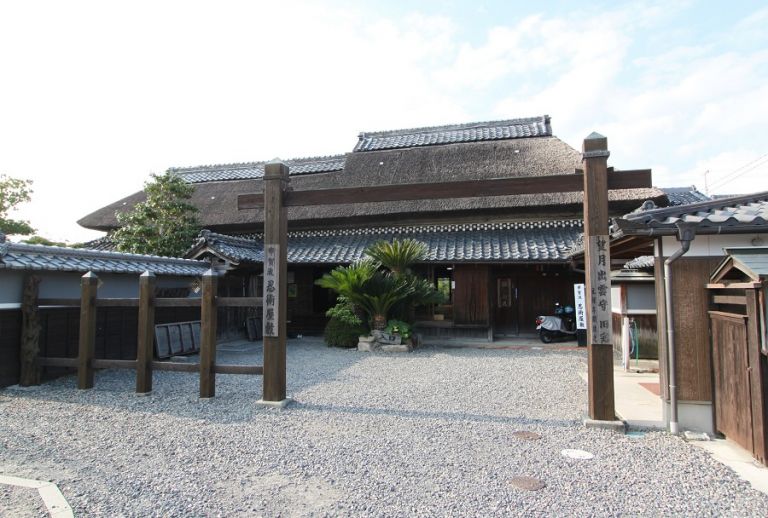 The 300-year-old house looks like an ordinary home from the outside, but on the inside, you’ll see ingenious traps and devices. These include alarm systems and escape tunnels to protect the original owners from intruders. You’ll also learn about fighting and survival techniques through the various displays in the mansion. 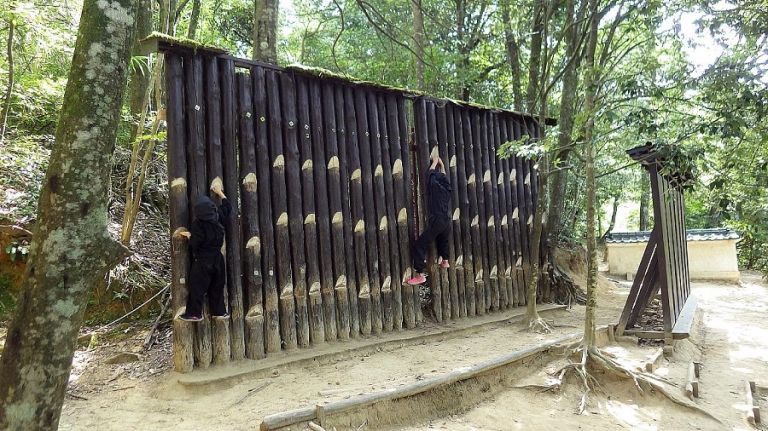 The village is a remote and rural compound of ancient dwellings in the middle of an untamed forest. Guests can explore the traps inside of the homes and try their hand at shuriken( throwing stars) on a target range. Another feature is the nine-stage obstacle course where you can walk on water and scale walls using shinobi inventions.