A small town 60 minutes away from Sapporo by car; known for their hot springs (onsen).

Jozankei onsen was founded in 1866 by an ascetic monk named Miizumi Jozan. He discovered the hot springs (onsen) in the area and opened a healing spa by the upper part of the Toyohira River. In order to develop the land, Miizumi Jozan cut through the forest and brought the injured and sick to his healing spa. His continued efforts inspired people to join him in constructing bridges and roads to the area. A small temple was built inside a cave called Iwato Kannondo. It is dedicated to the deity Kannon, Buddha of compassion, and was chosen for the individuals who lost their lives while building the roads to Jozankei. There are a total of 33 Kannon statues in the temple for the souls of the workers and for other protective purposes. The area’s growing reputation spread and soon more people were starting to settle around the hot springs. It was during the time when mining and lumbering flourished and the amount of people drastically increased. Restaurants and shops started to pop up with the increase of population. In 1918, the Jōzankei Railroad was opened for traffic from Shiroishi area to current Minami-ku area. The Jozankei Railroad crossed 29.9km and helped the village thrive. Now Jozankei is one of the best places to visit for onsens.

The enthusiastic efforts of Miizumi Jozan compelled the people to name the area Jozankei after him. On the 200th anniversary of Miizumi’s birth, the town opened the Jozankei Gensen Park. It is by the Tsukimi Bridge and open from 7am to 9pm. Admission to the park is free and has many onsen to visit. There are a few trails you can take to go up some of the mountains around Jozankei. You can go up Mount Hakkenzan, which has an altitude of 498m and rocks that over the top of the mountain. It was originally named Mount Kannoniwa-yama, but the rock formation at the summit resembled swords so the name was changed to Mount Hakkenzan, Eight Swords. The mountain can be seen from the national highway 230 on the way to the Jozankei Onsen. Another activity that is available is horseback riding at the foot of Mount Hakkenzan. There are various orchards around the base too that visitors can pick fruits. Just know that Jozankei is beautiful around October when the nature surrounding the town is colored with yellow, red and green leaves.

Things To Do in Jozankei 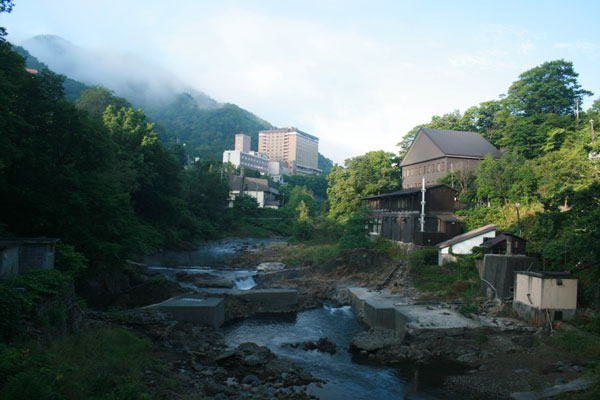 Known for its highly desirable sodium chloride water, said to have healing properties.