Lake Shikotsu is Japan’s most northern lake that does not freeze over and is the second deepest.

Lake Shikotsu or Shikotsuko is located within the Shikotsu-Toya National Park. It is a caldera lake, where it was formed from collapses in the Earth after a volcanic eruption. A volcanic event that happened around 40,000 years ago resulted in the formation of the lake. It is the second deepest lake in Japan at 363 meters. Though the surface area of the lake is ranked 8th, the lake has enough water to fill 75% of the largest lake in Japan, Lake Biwa. Due to its limited surface area and high depth, the temperature stays consistent and the lake remains ice free. The name Shikotsu derives from the Ainu word “shikot”, which means big depression or hollow. The Japanese tried to change the name of the lake to “engi” because shikotsu (死骨) translates to dead bones. The name did not stick though so it is still called Lake Shikotsu today.

Shikotsu is surrounded by three active volcanoes: north is Mount Eniwa and south is Mount Fuppushi and Mount Tarumae. Mount Tarumae is the most active volcano in Japan and had erupted in 1981. You can hike up any of the mountains, but just know that the center of the crater for Mount Tarumae is off limits due to the poisonous gases. However, it is possible to circle around the crater. By the northern shore of Lake Shikotsu is a ryokan, traditional Japanese inn, with hot spring baths that are connected to the lake called Marukoma Onsen. The onsen can be enjoyed by people who are not staying at the inn for a fee. Along the western shore of the lake is a town called Shikotsu Kohan. There you can go on a glass bottom boat to see the underwater habitat, rent boats or bicycles to go around the lake and go scuba diving with the lake’s red salmon.

Things To Do in Lake Shikotsu 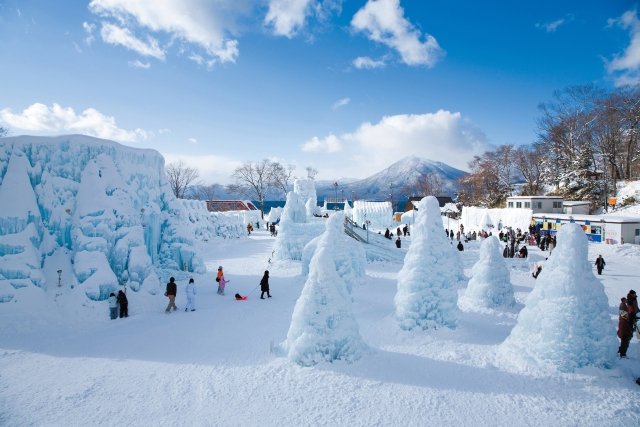 Lake Shikotsu Ice Festival starts at the end of January and lasts all the way to mid-February.