A prefecture known for its deep association with Japanese mythology as well as the warm climates, beaches and sporting facilities popular for a weekend getaway located in Kyushu Island, Japan.

Miyazaki Prefecture is bordered by the Pacific Ocean as well as Oita Prefecture, Kumamoto and Kagoshima Prefectures located on the east coast of Kyushu Island. Around 12% of the overall land area in Miyazaki Prefecture is contributed towards National Parks of Japan, which include Kirishima-Yaku National Park, Sobo Katamuki Prefectural Natural Park and Nichinan Kaigan Quasi-National Park. Each of the parks provides various types of scenic natural views of Japan. The warm climate, beaches, and sports facilities at Miyazaki Prefecture attracts many locals to visit, which ranks number one among places to visit for a honeymoon in Japan before the 1990s. Several areas of Miyazaki Prefecture have been recorded in historical records, legends, and folk tales associated with the Japanese Shinto mythology. Takachiho located at northern Miyazaki is among one of the locations deeply connected to Japanese mythology providing both a scenic view of the hidden gems of Japan, as well as a mystical atmosphere for travelers in search of Japanese religion roots regarded to Japanese locals as a power spot. At the Takachiho Shrine visitors can experience one of Japans most traditional dances with traditional instruments playing out the stories referred from Japanese mythology. The Amano-iwato Shrine offers a close look at the cave where the sun goddess Amaterasu hid, which resulted in a world with no sunlight. Paths from this shrine leading to the river, is also regarded as a popular power spot with thousands of stacked rocks left by previous visitors along the river bank. Travelers can take boat rides along rising cliffs from both sides while taking in the views of the area featuring a 17 meter high Minainotaki Waterfall at Takachiho Gorge. After a long day of exploring Miyazaki Prefecture, be sure to try out some of the local specialty dishes including, Miyazaki beef, chicken nanban, Kama-Age Udon and the fresh seafood. 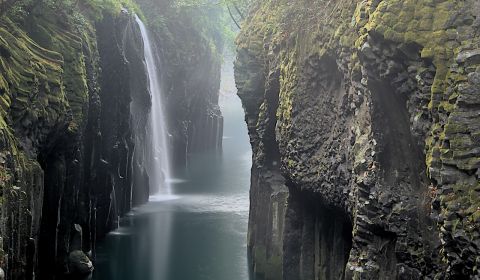 A town famous for its associating with mythological sites from Shinto legends located in Miyazaki Prefecture, Japan.

Miyazaki City is located in the central part of Miyazaki Prefecture and is the rail terminal city for southeastern Kyushu.