The largest prefecture on Shikoku Island known as the home to one of the twelve “original castles” in Japan and the birthplace of Sakamoto Ryoma.

Kochi Prefecture is located on the southwestern area of Shikoku Island bordered by Tokushima to the northeast and Ehime to the northwest. Although Kochi Prefecture has the largest land area on Shikoku facing the Pacific Ocean to the south, it is also the least populated among the other 3 prefectures. Around 7% of the overall area in Kochi is made up of National Parks accompanied by mountain terrain. Kochi Prefecture also offers travelers a mix of Japan’s history, culture, religion, and beautiful beaches. The Kochi Castle sits at the foot of Kochi City as the landmark and Important Cultural Property of Japan. Built in the 17thcentury, this castle stands as one of the twelve “original castles” of Japan, surviving both war and natural disasters from the Edo period to this day. The castle is now home to many historical treasures and artifacts attracting travelers in search of the samurai culture along with feudal castle enthusiasts all over the world. While the limestone caves of Ryuga-do connected by 24 different exits, offer adventurous travelers a stroll along the zigzag mystic tunnels of Kochi, ranking as one of the three most famous limestone caves in Japan. Chikurinji Temple located on Mount Godaisan is well known for its place in the Shikoku Pilgrimage ranking in at temple 31. The religious trail extends to Kochi Prefecture spanning over 1,200 kilometers consisting of 88 temples with the association with Kobo Daishi, the founder of Shingon Buddhism in Japan. Visitors can see pilgrims dressed in white, traveling along the sacred path during spring time, a common occurrence embraced by the Kochi locals, but a unique sight anywhere else. Travelers can relax at the beach resorts of Katsura-hama filled with water activities. Discover varies areas and statues featuring Sakamoto Ryoma, a Kochi local known as one of the most influential characters who paved the way towards the Meiji Restoration in 1868. Be sure to try out the signature dish of Kochi, the Katsuo no Tataki, which is a slightly grilled Bonito mixed with onions, garlic, green onions, and ginger during your visit to Kochi Prefecture, Japan. 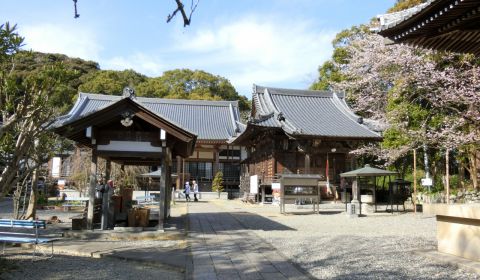 The prefectural capital and most populated city of Kochi Prefecture, Japan.