Urabandai is known as Bandai Kogen, it is an area dotted with ponds that were a result of a volcanic eruption in 1888.

Bandai Kogen (磐梯高原) translates to Bandai Highlands and is also known as Urabandai (裏磐梯), which literally means “behind Bandai.” The area is located north of Mount Bandai and is known for the ponds that are dotted around the highlands. Bandai Kogen reaches the Azuma Mountains in the north and Mount Adatara in the east. Those mountains are about 20 kilometers away from Mount Bandai. The highlands were created by an enormous eruption in 1888. The Museum of the Bandai Eruption was established in 1988 to commemorate the 100th anniversary of the incident. The 1888 eruption created many lakes of varying sizes within the highlands. One of the most notable results is the Five Colored Ponds (Goshikinuma). The different hues of blue of the ponds can be scientifically explained, but it does not take away the beauty of the bodies of water. It is fascinating based on the fact that these lakes were once barren land and now are a popular attraction for tourist.

There are a total of 7 climbing routes available with a potable water source on the way except for the Okinajima route. The most popular place to enter the Bandai Kogen from is Inawashiro city. It is located south of Mount Bandai and has a train station available. In the wintertime there are multiple ski resorts that pop up on the slopes of Mount Bandai and surrounding mountains. Skiers and snowboarders of all skill levels are able to enjoy the slopes that have high quality powdered snow. Not only can you enjoy time on some runs, you will also be rewarded with beautiful views of the natural scenery around Lake Inawashiro. There are a number of lifts available for use and the resorts tend to be open from December to early May. Each resort that has a lift offers different pricing for their services.

Another treat of the wintertime is the Yellow Waterfall, which is a result of water containing sulfur and iron freezing layer by layer. The waterfall shines in a golden color hence the name. If you are one to drive, then you can take the Bandai Azuma Lake Line. It is a road that goes from Inawashiro Town to Kitashiobara Village and offers scenic landscapes along your travels. The Bandaisan Gold Line is a road that connects the Aizu area to the Bandai Kogen. Driving on this road will afford you different views of Mount Bandai and take you to the caldera or Lake Inawashiro. This road is particularly popular in the fall for the foliage since it has hairpin turns that go through the forest. If you go to the area in June, then it is recommended to take the course that goes from Happodai to Oguni Swamp because batches of dwarf daylilies will be in bloom.

Things To Do in Urabandai 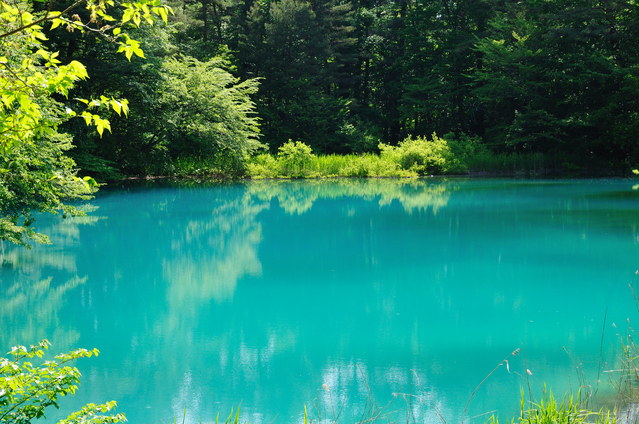 Goshikinuma is a collection of five lakes that vary in color depending on the season, angle, and time.